New Release: Bite Of The Past (The Black Fan #1) 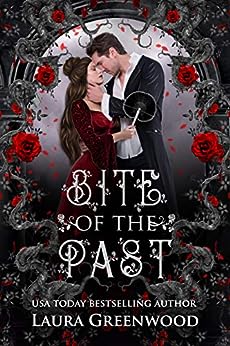 Bite Of The Past (The Black Fan #1) by Laura Greenwood

When Catherine encounters a man from her past, her life is turned upside down.

Outcast from vampire society hundreds of years ago, Catherine hasn't let anyone stand in her way of succeeding. As one of the most successful madams in the City Of Blood, she's made a name for herself.

But when she finds her first love in her waiting room, she is forced to confront the reasons she was thrown out of vampire society in the first place.

Is Benedict worth risking her heart for a second time?

-
Bite Of The Past is a second chance vampire paranormal romance. It can be read as a standalone and is set in the City Of Blood.

Before I even manage to make my way through to the reception, Sonia's bright and chirpy voice cuts through the silence. "Good evening, sir, how can I help you?"

The man coughs, and I hear the shifting of cloth. He's uncomfortable, then. Perhaps it's his first time visiting an establishment like this. "I've come to make an appointment," he says.

I freeze behind the thick velvet curtain which separates the two rooms, recognising the voice as one I never thought I'd hear again. And to some extent, one I hoped I wouldn't.

"Do you have someone in mind?" Sonia asks. "If you want an appointment now, I believe Bindi is free, or else I can book you in for one of the other girls later."

"I, er, I was hoping to make an appointment with Lady Catherine," he says.

"I'm sorry, sir. Lady Catherine doesn't take appointments any longer." Sonia's voice is firm, unlike how mine would be if I tried to speak.

Silence stretches between the two of them, and I realise I need to act. I know this man, and he's not going to stop looking for me if Sonia turns him away now.

I take a deep breath, though it does nothing to steady the nerves within me. I push the curtain to the side and step through the doorway. I spare a quick glance at the man, but don't look at him for more than a moment. I'm not ready yet. Luckily, his back is to me, and I have a few more seconds to compose myself.

The man turns around, his gaze resting on my face. Recognition and relief flash through his expression. "Kitty," he says.

"Regular blood, a good living, decent clothes, I can't complain," I snap, trying not to be too hurt by how flippant he's being about our situation.

"I didn't expect to find you here," he admits, a tinge of sadness in his voice. "I asked around, and everyone I talked to suggested you were, but I didn't want to believe it..."

I snort. "You didn't want to believe that the innocent maiden Kitty Knoylls became the infamous Madam Catherine?" I laugh at the irony there. He's not the only one to have had a rude awakening over the matter.

"It's been over five hundred years, how would you know what my kind of thing was anymore?" I snap.

Just then, the bell rings, and another potential client walks in. Surprising, given the timing, but I'll take it as a way to stop the awkward conversation no doubt about to happen.

I plaster a winning smile on my face and turn to greet him. "Mr Mills, what a surprise. I'm not sure Madeline is free at the moment." That's a lie, but I want to give myself a chance to escape from Benedict's proving gaze, and checking on her will do that.

"Oh, that's not a problem. Does she have a slot free?" he asks. "And it's a pleasure to see you again, Lady Catherine. I must apologise, I forget my manners."

"It's not a problem," I assure him. Especially with how often he's showing up at the moment. I should have a conversation with Madeline about it to make sure he's treating her okay. And not falling in love with her. That always ends badly. I've seen it happen more often than I want to admit, and it usually ends with spilt blood.

I make my way over to the desk and start tapping on the tablet, sending her a message. "Ah, it appears she's free. Would you like to take a seat in the other room? I can bring you a refreshment if you want one?"

"No, thank you, Lady Catherine. It appears you have your own guest. I'll be perfectly fine on my own." He dips his head, then disappears into the other room, leaving me alone with Benedict once more.

"What was that?" he asks once Mills has disappeared from sight.

I sigh. This is exactly what I want to avoid.

"It's my job," I point out. "He's come to see one of the girls, I tell her about it, she comes and takes him upstairs where they do whatever the two of them want to."

"And you're all right with that?" A horrified look crosses his face, though I'm not sure what part it's in response to.

I shrug. "Who am I to judge? They've chosen this as their profession, I make sure they're in a safe environment with all the comforts they can desire."

"I thought your friends called you it?"

"Then maybe you're not my friend any more." Anger seethes inside me. More than I expect. I always thought I'd be overjoyed when I saw him again, but that doesn't seem to be the case.

"We were so much more than that," he points out.

A bitter laugh escapes me. "We were. But that didn't stop you from throwing it all away, did it?" I counter.

He stares at me, a thousand questions in his eyes.

"What happened to you, Kitty?"

"I told you not to call me that." I cross my arms, trying to keep my voice level. The last thing I want is to cause a scene, especially when there are clients still in the building.

"Yes. I'm sure they did. Five hundred years ago." Tears prick the corners of my eyes. I need to get rid of him. Now. "Get out, Benedict."

His eyes widen as the shock sets in. "What?"

"You heard me. Get out. I don't want to see you again." Each word lances through my heart in a way that couldn't be expected.

He isn't the man I fell in love with. If I remember that, then I may get out of this without shattering myself into thousands of pieces again.

He opens his mouth to say something, but decides better of it and turns to leave. The front door slams behind him as silent sobs wrack through my whole body.

I hate him, but I love him.

And I don't know which is worse.

The Black Fan is a vampire romance series following vampire courtesans in the City Of Blood. Part of the Obscure World.

Email ThisBlogThis!Share to TwitterShare to FacebookShare to Pinterest
Labels: Bite Of The Past, City Of Blood, Paranormal Romance, The Bite Series, The Black Fan, The Obscure World, vampires