New Release: Trust Of The Goddess (The Queen Of Gods #2) 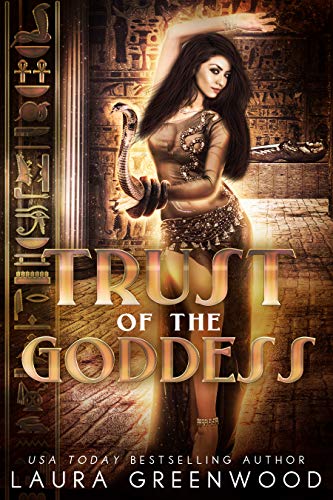 Being betrayed by someone she trusts is the least of Hathor's problems...

While she might have one god on side, she still has to convince the others to join the fight against chaos. But it might be easier said than done, especially after Amun's betrayal.

Can Hathor overcome the pain in her heart?

-
Trust Of The Goddess is the second book in the Queen Of Gods Trilogy and is based on Ancient Egyptian Mythology. It includes a slow burn romance between Hathor and Amun.

I met my gaze in the mirror and steadied myself. I had to do this. I needed to know if he was the person Nephthys had implied he was.
I reached out and touched the ankh, then waited. He would be here in a moment, I was sure of it. Though how he was travelling so quickly was still a mystery to me. Unless he was hiding in my room the entire time, but that seemed unlikely. Even if he was on Seth's side, he'd still have a lot of work to do
"Hathor."
His voice sent a shiver down my spine, causing my eyes to flutter closed.
A hand pressed against my stomach, pulling me back into him. His lips trailed a line of kisses along my neck, and I leaned into him further.
Gently, he turned me around so we were facing one another. Before I knew what was happening, his lips were on mine and I melted into him, all resolve completely gone.
What was it I wanted to talk to him about again?
Oh. Wait. Seth.
It took all the inner strength I could muster to push him away, even if I knew it was for the best. I couldn't let him distract me with kisses. At least, not if I wanted anyone to take me seriously ever again.
The goddess of love tricked into thinking someone cared about her. I could almost hear the mocking tone already. Though I couldn't think of anyone but Horus who would use it towards me. The only reason he could was because he had a similar level of magic to me.
And he knew I wouldn't castrate him for Khonsu's sake. I didn't want to leave the moon god without a bed partner.
"Hathor? Are you okay?" Amun asked, something akin to true concern in his voice.
"Why didn't you tell me?" I answered.
He cocked his head to the side as he studied me. "Tell you what?"
"You know what," I hissed, causing Ura to wake from her slumber on my pillow. I wanted to go comfort my pet snake, but refrained. It would ruin any upper hand I had.
Amun simply stared at me, either genuinely confused, or the world's best actor.
"Seth."
The name dropped between us like a stone.
Understanding dawned on his face. "I wasn't aware my political affiliation was something I had to disclose," he said off offhandedly.
I took a step back to put some much needed distance between us, and bumped into my cosmetics table.
"This isn't about politics," I pointed out. "It's about the stability of the world."
He shrugged. "That's all politics is. Besides, the world needs a little chaos every now and again."
"And you think that's what Seth is planning? A little chaos?" My anger came through every word, but I didn't care. I needed him to realise how wrong his choice was.
Amun sighed. "He does this all the time. No harm ever comes of it." Something about the way he's saying it feels off. As if he doesn't believe it wholeheartedly.
There was hope yet.
"I suppose there's no harm in the wars, genocides, and persecutions Seth's interference has caused, then?" I raised an eyebrow and waited for him to contradict that one. I still felt every death to the centre of my ba. I was mother to them all, and I would mourn them.
Amun looked visibly shaken, but I could tell he wasn't about to simply give in to me. Despite the touchy subject, I respected him for it. I wouldn't be giving in yet either.
"Every time Seth has tried something, we've stepped in and stopped him," Amun said quietly.
"As we should." I couldn't believe I'd almost sat this one out. I would have, if Ma'at hadn't stepped in and persuaded me. Which was why I had to do the same for Amun.
"But did you ever notice that things never got better after we stepped in?" Amun asked. "Seth never stopped plotting, the humans never stopped fighting. Everything simply continued."
"What are you saying?" I whispered, a little scared about what his answer might be.
Amun grimaced and ran a hand over his face and through his hair. At least he didn't seem to like what he was about to say. It was a small victory, but it was something.
"If we can't fix things by doing them our way, then we should try something different."
I blinked a few times, trying to process what he was saying and not just repeat his words.
"You think doing things Seth's way will change things for the better?" I couldn't believe what I was hearing. It was a crazy idea.
"It's worth a try," he said softly.
"No. It isn't."
"Hathor..."
"No," I repeated. "I think it's best you leave."
Amun's shock mirrored my own. I doubted either of us would have expected this of me.

The Queen Of Gods (Paranormal/Mythology Romance)

A fantasy romance series following the Goddess, Hathor, as she searches for lost Gods to join Ma'at's fight against Seth. Part of the Forgotten Gods Universe.

Email ThisBlogThis!Share to TwitterShare to FacebookShare to Pinterest
Labels: Consorts of the Goddess, Egyptian Mythology, fantasy, Fantasy romance, Forgotten Gods, mythology, The Queen Of Gods, Trust Of The Goddess