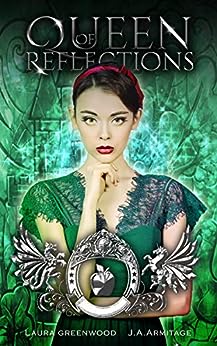 Raised to be the perfect heir to Snow White and her King, Kelis is confident and determined even if she doesn't quite fit in. When she finds out her years-long crush is visiting Enchantia for the up-coming Fright Festival, she decides it's time to up her game, even if that means finally learning the magic her people are known for. With a mirror who is constantly on her case, her cousin and his friends to entertain, and nightmares that haunt her nights, Kelis has her work cut out for her.

Queen Of Reflections is the forty-first spellbinding episode in the new Kingdom of Fairytales series. Following famous fairytale characters, eighteen years after their happily ever after, the Kingdom of Fairytales offers an edge of the seat thrill ride in an all new and sensational way to read.

==> books2read.com/queenofreflections
Posted by Laura Greenwood at 12:24