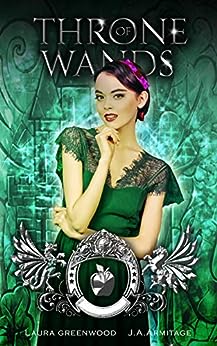 With the support of her friends and family, Kelis continues to search for a solution to her mother's new curse but only finds whispers of the evil step-mother returning. Realising there's more to herself than the princess she's always been, both as a magic-user, and as a person, Kelis is ready to protect Enchantia the best way she can.

Throne Of Wands is the forty-third spellbinding episode in the new Kingdom of Fairytales series. Following famous fairytale characters, eighteen years after their happily ever after, the Kingdom of Fairytales offers an edge of the seat thrill ride in an all new and sensational way to read.

==> books2read.com/throneofwands
Posted by Laura Greenwood at 12:30