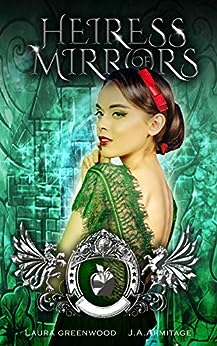 Snow White is no longer the most beautiful woman on all the land, and with Kelis' nightmares kicking up a notch, she's more worried than ever. Determined to help her mother at all costs, Kelis heads out into the woods with the only Topher to help her. But even seven friendly dwarves can't help her when she closes her eyes.

Heiress Of Mirrors is the forty-second spellbinding episode in the new Kingdom of Fairytales series. Following famous fairytale characters, eighteen years after their happily ever after, the Kingdom of Fairytales offers an edge of the seat thrill ride in an all new and sensational way to read.

==> books2read.com/heiressofmirrors
Posted by Laura Greenwood at 12:27