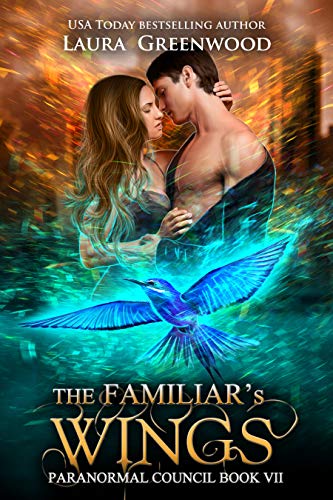 The Familiar's Wings (The Paranormal Council #7) by Laura Greenwood

A second chance at love makes sparks fly…literally.
Ethan was left heartbroken when his childhood sweetheart, Eliza, moved away at seventeen. Now, fate has brought them back together, and Ethan is determined to make her work for his forgiveness.
Eliza has always regretted leaving Ethan, even if she'd have had to hide her true nature from him if she'd stayed. But once they come together again, they learn things about one another that they'd never known before.
-
The Familiar's Wings is part of the Paranormal Council series and is Eliza & Ethan's complete romance.
The Familiar's Wings was previously released as Spellbound. Only the title and cover art have changed.

“Hi, I’m Ethan Sanders,” he introduced himself, as if they were strangers. But she noticed the slight curl of his mouth and the glint in the eye that often accompanied his playful moods.

“Eliza Davidson.” She took his hand, and the moment their skin touched, what felt like a bolt of magic travelled through her. Maybe she was imagining it after the shock of seeing Ethan. That was by far the most logical explanation. At least, she figured that was more likely than their touch causing a magical reaction. Surely she’d have noticed it while they’d dated before.

The two of them lingered over the touch, which probably looked odd from where Denise was sitting. Thinking of the receptionist, Eliza hastily pulled her hand away and gestured towards the lifts. “If you’d like to follow me.”

The moment the lift doors closed, and the two of them were alone, Eliza could almost swear that the magic sparks were back, except this time they weren’t even touching. She tried to dismiss them as a mere hallucination, but nothing she was doing or thinking would make them go away. She briefly considered actually using her magic to attempt to make them disappear, but quickly shut down that notion. She couldn’t do that in front of a human, even if the human was Ethan.

“It’s good to see you,” Ethan said, breaking the silence the moment that they were in the meeting room.

“You did recognise me then?” Eliza cursed inwardly, hating just how awkward her question had sounded.

“How could I not?” he muttered, setting down his bag and pulling out a tablet. He sat down in one of the chairs and made himself comfortable. She could feel his dark brown eyes watching her, but rather than feeling uncomfortable or objectified, Eliza found herself appreciating the attention. It’d been too long since any man had made her feel like that.

“How’ve you been?” She was at a loss for what to say. Technically, she supposed that she could have started the meeting. After all, that was the real reason he was here. But something in Eliza thought that it was a bit rude to do that, especially when they hadn’t seen each other in so long. Also considering that she’d pretended more than one of her lovers had been him.

She shook her head slightly, desperate to rid herself of the images her imagination had conjured up. When they’d dated as teenagers, they’d only ever had sex the once. It’d been the night before she’d moved, and they’d never had a chance to repeat the experience. But her overactive imagination had plenty of fun conjuring up images of things they could have done together. Particularly when she was feeling unsatisfied.

“I’ve been good. What about you?” he answered.

“Yeah, alright thanks.” They lapsed into silence. “I’ve missed you,” she blurted out without meaning to. She cursed herself, it wasn’t that she’d lied. More that it wasn’t the kind of thing she wanted to admit in front of an ex, even if it was true. A slow smile spread across Ethan’s face, making him appear all the more handsome to her.

“I’ve missed you too,” he admitted, surprising her. She smiled back, and the two of them took the opportunity to move on to the work that they were supposed to be meeting about, the awkwardness banished by the safe subject.

A completed shifter romance series following various shifters affiliated with the Shifter Council. Each book can be read as a standalone. Part of The Paranormal Council Universe.

Email ThisBlogThis!Share to TwitterShare to FacebookShare to Pinterest
Labels: The Familiar's Wings