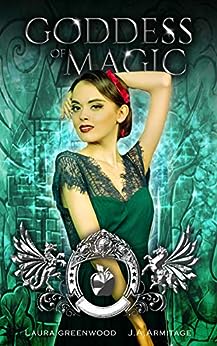 You all know the story of Snow White , but did you ever wonder what happened after the fairytale ending? Well we do. Not all afters end up happily, sometimes the real adventure starts much later…

As the Fright Festival and the Spell Casting competition approach, Kelis' dreams of the future going stronger, and she is torn between what her heart wants and what's best for the Kingdom. As things become clearer, Kelis has to embrace the visions she's been having and what that means for her future as the Princess of Enchantia.

Goddess Of Magic is the forty-fourth spellbinding episode in the new Kingdom of Fairytales series. Following famous fairytale characters, eighteen years after their happily ever after, the Kingdom of Fairytales offers an edge of the seat thrill ride in an all new and sensational way to read.

==> books2read.com/goddessofmagic
Posted by Laura Greenwood at 12:31