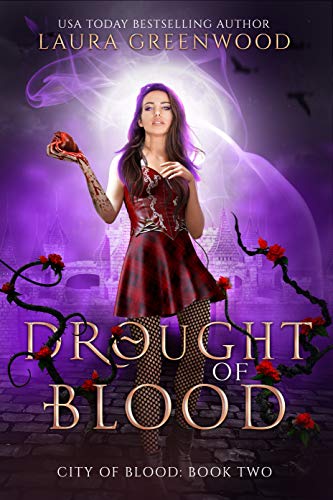 Drought Of Blood (City Of Blood #2) by Laura Greenwood

The Rebellion is over, and the members executed. But I'm still alive...for now.
I did the one thing I wasn't supposed to, putting myself and others in danger. Now, it's just me and the illegally turned vampire living in my one bedroom apartment against the world. Unless we can persuade Catherine to help.
Preferably before we get caught.
-
Drought Of Blood is book two of the City Of Blood series, a gritty vampire urban fantasy with a slow burn romantic sub-plot.

Rain beats down on me, drenching every inch of me. I'm not sure if it's because of how I'm feeling, but it seems as if there's been more rain than normal. It wouldn't be completely out of the realm of possibility that the Mayor has put some kind of rain machine on the walls and is spraying everyone to make us all more miserable.

Then again, I don't think she really needs to do that, especially not if there's going to be extra check-ins. If that's what this is and not just a trap to arrest me. At last if it is, Oscar will still be safe.

Unless they have people ready to storm my flat.

I wish I'd never gotten involved with the resistance. No. That's not fair. I wanted to be involved. Even though my real job risks my life every second of the day, something about being part of the resistance feels more dangerous. Like I've put a target on my back as far as the Mayor is concerned.

Oscar's right, though. If we want to make a difference now, then we're going to have to work out who is the leader of one of the other rebellions. I'm going to bring this city down, no matter who I have to work with to make it happen.

A groan escapes me as my foot slips into a surprisingly deep puddle. The cold water splashes over the side of my boot, making my socks annoyingly squishy.

Great. Now I'm going to have to walk around like this for the next couple of hours. Maybe even longer, depending on how long the check-in process takes. Normally, it's a quick in and out if there isn't a queue, but with this being an unexpected check-in, I'm not so sure how it's going to work.

I pull out my phone to check the time, regretting it instantly as water drops form on the surface.

"Urgh." I stick it back in my pocket, hoping I have enough time to get to check-in.

The closer I get, the more vampires join me on the streets, each heading towards the same place I am. None of them talk to anyone who isn't already part of their bubble. That's not unusual. Most people keep their heads down so they don't draw unwanted attention.

Making friends in the City Of Blood isn't advisable. They can turn on you in a matter of moments.

When I finally arrive at the building, I make my way up the steps, following behind a couple who look as if they've been partying all day. Perhaps they have. I've heard rumours about lock-in parties where a group of vampires wait for the shutters to come down and then go crazy.

"What's this all about?" the woman asks one of the guards.

His only response is a scowl.

"Come on, Valerie, you're not going to get anything out of them. Let's just get this over with." The man puts a hand on the small of her back and pushes her inside the building.

He's not wrong. The guards all have too much practice not revealing anything. The human Queen's guards could learn a thing or two from them.

I push a strand of sopping wet hair away from my face, glad to be out of the rain. I scan the room, searching for any indication that things aren't what they seem, but it appears to be exactly the same as it normally is when there's a check-in.

The only difference seems to be that the woman behind the desk isn't the same one as normal, but I suppose that makes sense. It's a completely different time and day. There's no way the people here are paid enough to work overtime.

Though it could be something more sinister. Anyone can find themselves sent to the cage fights at any point, even if they work for the government.

I get in line behind the couple, trying not to fidget too much and give my nerves away.

"Have you heard about the executions?" someone behind me says.

"The ones they just announced?" the person's friend answers.

I resist the urge to pull my phone back out and check for alerts. I don't want them to know I'm listening, or otherwise draw attention to myself. Besides, there's as much chance of me learning something from what they're saying as there is of me learning it from an official message.

"Yes. I wonder if it's to do with the disturbance at the parade," the first person answers.

I glance up as sneakily as I can. The speaker is a middle-aged woman in a well-fitted suit. She must work in the private sector rather than for the government, or she wouldn't have to be at a check-in with the rest of us. The second person is younger, with her hair piled up on her head and a work-out outfit. They look similar enough that I'm guessing they're parent and child, but I wouldn't stake my life on it.

"It took them long enough to do something about it," the younger woman mutters.

"Hazel, quiet," the other one chides. From her tone, I'm guessing I'm right about their relationship. Only a parent would talk to their child in public like that. "You don't know who is listening."

She's right about that. But I'm not about to turn them in. Not only do I not want to put anyone in danger, but there'd be no advantage to me drawing attention to myself if I don't have to.

Rule number one of being a spy, don't do anything to blow your cover. Actually, that's a lie. While training, the first thing they taught us was to remember that we can fail. Especially if we act without keeping the rest of our team in mind. Guilt floods through me at the thought. That's exactly what I've been doing this entire time. I've not cared about how Bram, Dimitri, and the rest of the people who got me here will be affected, all I've thought about is my own agenda and what I want.

"But it's true," Hazel complains. "They tried to hurt the Mayor, and it's taken weeks for them to be punished. What do you think has taken them so long?"

The older woman sighs dramatically, but I can tell from her lack of chastisement that she actually agrees with her daughter. I can understand that. It has taken a long time for Heather and the others to get punished. But unlike the women behind me, I have a good idea why it's been delayed. They've been using the time in order to get more information from the members of the resistance than they already have. No doubt the Mayor will want everyone involved rounded up and killed. Hopefully, Heather's insistence on not knowing much about one another will save our lives. At least for now.

It won't save the people who were caught though. I try not to dwell on that too much. I've no idea how many people were rounded up that night. For all I know, we may be the only members who escaped with our lives, though that seems unlikely. I managed to tell some of the others that we were in danger before I found Oscar, and he messaged more. All it would have taken to blend into the crowd was removing the stupid armbands. It's a wonder we weren't caught earlier with such an obvious indicator of what we were up to. The blame for that one lays firmly at Heather's feet. And she's going to pay the price for it. I wince at the thought. I may not particularly like the woman, but I don't want her to die.

The women behind me have moved on in their conversation, so I let my attention slip. I move forward in the queue as more of the vampires in front of me check-in. Despite none of this looking, or feeling, out of the ordinary, I can't help but worry that will all change when I get to the desk. It can't be a coincidence that an extra check-in has been called the same day they announce the executions, can it?

An urban fantasy dystopia series following vampire, Chloe, as she works to take down the vampire run City Of Blood. Part of the Obscure World.

Email ThisBlogThis!Share to TwitterShare to FacebookShare to Pinterest
Labels: Drought Of Blood