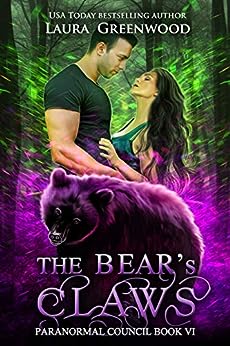 ==> http://books2read.com/thebearsclaws <==
Can they heal each other's wounds, or will they live the rest of their lives alone?
The only way for Vic to deal with the death of his parents, is to hide away in the woods, doing everything that he can to avoid his responsibilities as the panther alpha.
For years, Nita believed that her entire family was dead. But hearing a rumour that her cousin is still alive, she sets out to find him.
A chance encounter in the woods, brings the two shifters together, and something quickly sparks between them.
-
The Bear's Claws is part of the Paranormal Council series and is Vic & Nita's complete romance.
The Bear's Claws was previously released as His Lost Bear. Only the title and cover art have changed.
==> http://books2read.com/thebearsclaws <==
Posted by Laura Greenwood at 19:37

Email ThisBlogThis!Share to TwitterShare to FacebookShare to Pinterest
Labels: The Bear's Claws