Stories From The City Of Blood: Story Two 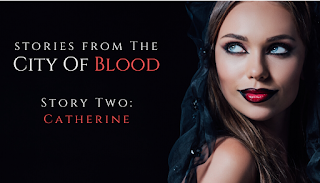 I dust off the skirts of my dress and walk into the room. My next client is in there already, and I don't want to keep him waiting. It's barely been three years since I set up my own brothel, I'm still at the stage where I don't want to do anything that'll ruin my reputation.
"Lady Catherine," the man says, rising to his feet the moment I'm in the room.
My eyebrows shoot up. How does he know my true name? I haven't told anyone it in years. "I go by Kitty now," I correct him. It won't be forever, but in vampire terms, it isn't that long since I left my den.
"My apologies, Kitty." He bows deeply, then steps into the light of the fire.
Understanding of who he is washes over me. I make my way over to the pitcher of wine to cover up my surprise. My hand shakes ever so slightly as I pour out two glasses.
"It isn't often we get priests in a place like this," I say, holding my voice as steady as I can.
He chuckles. "It isn't often you find noble ladies in them either," he returns.
"I think you'd be surprised how wrong you are there, Reverand." I turn and hold out one of the goblets of wine for him.
He takes it from me, making sure our fingers don't touch. "Thank you."
"My guess is you're not here for the normal reason."
"I've left priesthood behind."
"That's not what I've heard." I tap my fingers against the goblet, my confidence growing with every passing moment. "Tell me, Reverand Dimitri, how long has it been since you were turned?"
"About fifteen years," he admits.
"The Madam of a brothel, was it not?" I try not to smirk at his slight flinch.
"How do you know all this?" he asks.
It's my turn to chuckle. "Money isn't the only currency of whores." I shrug. "We trade in whispered secrets and shared confidences. And as it happens, I worked with a girl who was there that night. She traded her knowledge of it for something I knew."
"And what was it you knew?"
"It was of little import," I dismiss. "If you're not here to partake in my pleasures, then can I ask what you are doing here?"
"I've heard you're a free woman," he remarks.
"Of a fashion." It feels odd to stand in the middle of the room while entertaining a client, but he doesn't strike me as the kind of man who'll take kindly to me sitting by him. Whether he wants to admit it or not, I've heard whispers about how he's trying to stick to his former beliefs. If the rumours are correct, he's even gone as far as setting up a guild to hunt vampires, despite the fact he is one himself.
"I want you to help with my cause," he admits.
I raise an eyebrow and take a sip of my wine to cover my discomfort. "I won't be a part of anything that brings harm to other people," I inform him coolly.
"Kitty, please. Vampires took everything from you," Dimitri protests.
"No," I correct. "My family took everything from me. The Madam who enslaved me took everything from me. They happened to be vampires, but humans would have just as easily done the same."
"That's where you're wrong," he says.
"Is it? Last I checked, priests were held to a higher set of morals, and yet you were turned a brothel. Hardly virtuous."
He stares at me, no doubt wondering how he's ever going to respond to that.
"Vampires are a plague," he spits.
"And you're one of them." I turn away from him and sweep towards the door. I pause for a moment, but don't turn to look at him. "Security will show you out."

Email ThisBlogThis!Share to TwitterShare to FacebookShare to Pinterest
Labels: Bonus Scene, Bonus Story, City Of Blood, Stories From The City Of Blood, The Obscure World