The Twin Souls Trilogy, co-written with Arizona Tape, follows Ayra and Tate as they realise they're not only in the wrong paranormal bodies, but they're also with the wrong soulmates! It is part of the Twin Souls Universe.

The pain was back. It completely consumed me, devoured me. But I wanted it.

This pain would take me to Sian. When I opened my eyes, I would be in the body that was supposed to be mine. And even if it was just for a little while, even I couldn't stay forever, it was worth it. She was worth it.

I hugged myself. Time to go see the real love of my life.

Soulswap is a paranormal romance with a Freaky Friday twist. (Which means body swapping, if you were as clueless as Arizona.)

Books 1 & 2 in the Twin Souls series have concurrent timelines and can be read in either order.

Pain started to build in my head, and I knew what was coming. But this time, I welcomed it.

I was going to see Devon again. I was going to live in the body that was supposed to be mine. And even if it was just for a few hours, those few hours were time I hadn't had before.

I closed my eyes. Time to go see the real love of my life.

—
Soulshift is paranormal romance with a Freaky Friday twist. (Which means body swapping, if you were as clueless as Arizona.)

Soulshift is book 1 in the completed Twin Souls Trilogy.

Time is running out for Ayra and Tate. Especially with their bodies fighting against them every step of the way. Being together only makes the swapping more confusing and erratic. Can they find a way to trade their body for the one that was always meant to be theirs in the first place?

Soultrade is the third and final book in the completed Twin Souls Trilogy.

Everything is just short of perfect for Tate and Ayra - even their soulmates.

Join them on this soul-swapping adventure featuring dragons, vampires, romance and more. Can they find their fated mates? Or will they be stuck in the wrong bodies forever?

Contains all three books in the Twin Souls Trilogy: Soulswap, Soulshift, and Soultrade. 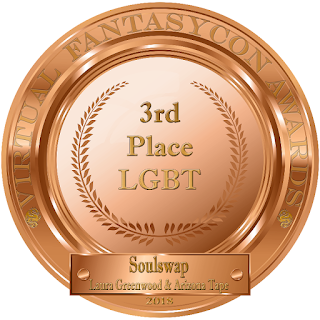