This page is about Senet, the Ancient Egyptian game played by characters in the Forgotten Gods Universe, and in The Apprentice Of The Dead series. 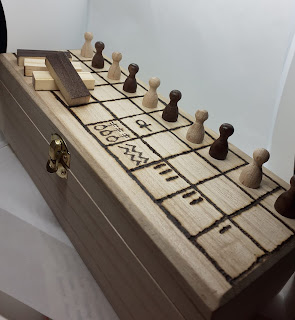 Senet is a game of luck and chance that was popular throughout Egyptian history. There are many wall paintings in tombs depicting the deceased playing Senet, as well as elaborate Senet boards provided within the tomb treasure for the deceased's use in the afterlife. Boards played on by the living have also been discovered, though there has never been a complete list of the rules ever found, leaving them open to interpretation.

While the game is commonly associated with the journey into Duat (the afterlife) and the game thought to reflect it, that only became the case in more recent dynasties. During the Old Kingdom, Senet was a secular game played for fun.

There are many similarities between Senet and backgammon.

The Rules Of Senet

Senet is a game for two players of Ancient Egyptian origin.

Please note: The rules of Senet are based on fragments of information found during archaeological digs, however, no complete set of rules has been found, so there is some room for interpretation within the rules themselves.

Each player has five pieces. The five light pieces should start the game on odd numbered squares (1, 3, 5, 7, & 9), and the five dark pieces should start the game on the even numbered squares (2, 4, 6, 8, & 10). To decide which player is which colour piece, cast the sticks (or roll the dice) until someone gets a score of 1. This player uses the dark pieces and can move their piece from square 10 to square 11. On their first turn, the player using the white pieces must move the piece from square 9. After the first go, players may move any of their pieces.

Aim Of The Game

Square 26  - a safe square, where pieces are protected from changing places. You don't have to move off this square until you want to, but if no forward move is possible, then you must move backwards.

Square 27 (water) - if a piece lands on square 27, then it must be moved back to square 15. If square 15 is occupied, the piece which landed on square 27 should be sent back to the beginning of the game.

Squares 28 & 29 - safe squares, where pieces are protected from changing places. You don't have to move off these squares until you want to, but if no forward move is possible, then you must move backwards.