Stories From The City Of Blood: Story Four 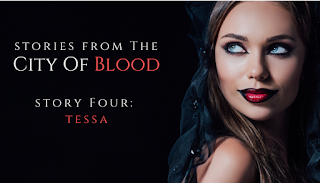 I look over my shoulder, even though it's daylight and I know none of the vampires who rule this city will be following me. They can't. Stepping outside during the day will burn them into a crisp. I saw it once, when the Mayor decided to punish one of her own my staking them in the middle the of square and then making people watch as the sun set his skin on fire.
A shiver runs down my spine at the memory. At times like that, I'm glad I'm not a vampire.
The line for blood donation is particularly long today. I sigh and push a hand over my face. I have to text my boss and let her know I'm going to be running late. Thankfully, she'll understand. It's a hard life being human in the City Of Blood.
"Hey, Tessa," my friend Billy says as he gets in line next to me.
"Hi," I mumble, unsure if I'm ready for his vibrant energy this early in the day.
"Weren't you here on Saturday?" He cocks his head ot the side.
I snort. "You were too."
A dark shadow crosses over his face, but it's replaced by a bright smile too quickly for me to say anything about it.
"You know how it is," he says offhandedly. "The payouts don't seem to go as far as they used to."
I grimace. "Don't I know it."
The line moves forward, taking the two of us with it.
"Is your Mum still sick?" he asks after we've come to a standstill again.
I nod. "That's why I'm here." The money being paid for blood donations is smaller than ever, and all of the prescriptions are getting more expensive as each day passes. I can't say anything about it, but I think it's purposeful. A way for the ruling vampires to keep control over the masses.
The queue moves again. I shuffle forward, watching as the woman in front of me slides into one of the booths. I scrunch up my nose, hating the idea that it's my turn next. The first time I did this, I freaked out so much. I hate the needles, I hate feeling the blood getting sucked out of me. Though I suppose it's best that's done in a sterile environment like this one, than by a hungry vampire on the street.
"Next," the robotised voice says.
I sigh and roll up my sleeve as I slide into the seat. I scan my ID card in the slot. It beeps, letting me know it's worked. Once I've given my blood, it'll assess the quality of it, and pay out based on that. I'm not sure how it works, but rarer blood types end up more valuable, and blood laced with drugs or alcohol is worth less. I suppose it does make some kind of sense. If I were a vampire, I don't think I'd want boozy watered-down blood.
The needle pricks my arm, and I wince. I'm sure the insides of my elbows are going to start looking as if I'm a drug addict. But what else can I do? The price of living is going up, but my wages aren't. My boss can't possibly pay me any more than she does, her margins are also being squeezed.
I close my eyes and ignore the sucking sensation I hate so much. This isn't the time to freak out about it.
The whole ordeal is over in a matter of minutes. I pull my arm back and slap a band-aid on it, glad I bring them with me whenever I have to go.
A receipt spits out of the machine. I grab it, knowing it'll be useful for finding out how much money has been deposited into my account.
"What?" I demand, staring at the paper in front of me. According to the receipt, my blood is grade 1, the best, and yet I've been paid a pittance for it. Even less than last week.
If this keeps up, then they're going to bleed me dry in more ways than one.