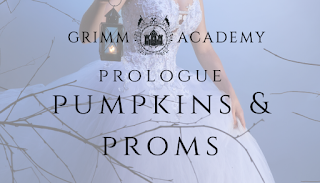 Sent to Grimm Academy by her jealous step-mother, Ella is determined to make the most of the opportunity.

With her friends by her side, and her dress-making lessons with Rapunzel progressing well, she's starting to think she can avoid her prophecy after all. But when her dress is ruined the night before a masked ball, she has to face the truth.

Can she stop her prophecy by midnight?

Please note: this excerpt is unedited and is subject to change. Copyright 2020, Laura Greenwood.