Stories From The City Of Blood: Story One 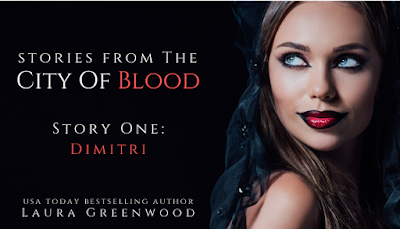 "Another one is dead," Bram says as he walks into my office, Ashryn just behind him with a grim look on her face.
I sigh. "She found him again?"
"We're guessing so. It's impossible to know what's happened. He could have defected instead." Bram shrugs and I'm right there with him.
"We'll need to find someone else to go into the city in his place," I muse.
"Do you have any ideas?" Ashryn asks as she slips over to me and kisses me on the cheek.
I put an arm around her and squeeze her tightly, but don't do anything more than that. We can save that for after the work is done.
"Is there anyone free to pick up the position?" I ask Bram.
"The only agent without an assignment is a recent graduate."
"What's his name? Can we get assessments in place for him?" I ask.
"Her," Bram corrects. "It's a young woman, Chloe Webb."
Hmm. Can I send a woman into the City Of Blood? Every agent we've sent there has ended up dead or turned to their way of life.
"Dimitri, are you listening?" Ashryn asks.
"Sorry, I was considering whether or not we can send her in," I say.
"No," Bram answers instantly. "She's untrained, and a..."
"If you dare say woman, I will gut you in the night with my sai," Ashryn threatens, rounding on him. "You both know women are just as capable as men. You didn't even manage to take the guild down until I came along." She crosses her arms and fixes us both a look that she thinks will get us into line. I'd like to be able to say she's wrong, but we all know we'll cave to her.
Bram chuckles. "You wouldn't gut me."
"But you don't want to risk it, do you?" A smile lifts her lips. She really is beautiful. And deadly. Something none of us should forget.
"You have a point. We shouldn't discount her because she's a woman," I say, cutting through the murderous tension between them. After a couple of years together, I've gotten used to the fact Ashryn and Bram still seem to hate and love each other at the same time. I'm grateful my relationship with her isn't the same.
"Maybe that's where you've been going wrong." Ashryn taps her finger against her chin. I check her hips to make sure her sai are in another room. It's always reassuring when she doesn't have weapons. "What kind of agents have the two of you been sending?"
Bram and I exchange a worried glance.
Ashryn chuckles. "You've been sending in hulking men who look like they can rip someone apart with their bare hands, haven't you?"
The silence tells her everything she needs to know.
She sighs loudly. "Men, always stuck in the century they were born in," she mutters.
Bram snorts.
I mull over what she's suggesting without saying it outright. Perhaps she's right. Reese was part of my den before she founded the City Of Blood, she probably knows how to spot my agents. Which means I've been going about this all wrong.
"All right," I say. "We'll do it your way."
A triumphant smirk spreads over her face.
"But she needs some extra training first. And she'll need fully briefing."
"I can train her," Ashryn offers. "If anyone knows how to get close to vampires without them noticing, it’s me."
I nod at her. "Training with you, and briefing with Bram."
And then we'll send this Chloe girl off to certain death in the City Of Blood. Unless she can do the impossible and bring it to its knees.

Posted by Laura Greenwood at 21:36