October is Black Cat Appreciation Month (at least, according to some sources it is. Some others seem to think that it should be August, but that's well and truly gone, so we're running with October!)

Black cats are the least likely to be adopted from shelters, and I've seen this first hand. My best friend (who I've known since we were eleven) has a black cat named Jack, who she adopted because no one else would. And he is an absolute sweetheart. He loves cuddles, and will climb inside her jumpers (and once climbed all over my face while I was sleeping).

Luckily for me, black cats are lucky here in the UK, and I can certainly say that Jack was! 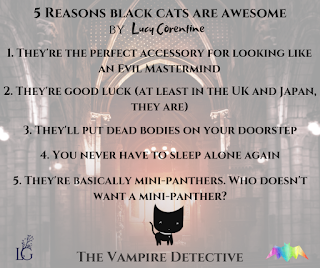 A Bit About Lucy Corentine

Lucy is the main character of The Vampire Detective Series, co-written with Arizona. It's part of our Twin Souls Universe with a focus on the vampire side of society. Lucy is quirky and intelligent, not to mention a bit of a detective, and she's determined to solve a mystery (I can't tell you what the mystery is though...spoilers!) Oh, and in case you didn't guess, she owns a black cat, his name is Jester, and he's a real mischief maker!

Get the series here:

Posted by Laura Greenwood at 22:26

Email ThisBlogThis!Share to TwitterShare to FacebookShare to Pinterest
Labels: Arizona Tape, cats, Character Posts, Fangs For All, Fangs For Nothing, The Vampire Detective, Twin Souls, Vampire PI, vampires, What The Fangs