I'm super excited to be able to announce that the fourth book in the Paranormal Council Series is now LIVE!

Tony and Eden's story is actually one I've had planned since I started writing book 2, and for anyone who has read The Dryad's Pawprint, you may notice that Tony has made an appearance before! (Actually, so has Eden! She first appears at the end of the spin-off, Spellbound).

In fact, one scene from The Vampire's Bite, was written at the same time as I was writing The Vixen's Bark! Talk about crazy right?!

There's been a few changes to the line-up for the next few Paranormal Council books too (I know, I'm sorry!) Next was going to be Nathalie's book (The Lion's Crown) but the regig has brought forward what was going to be book 6 (Dana and Luke's book, The Witch's Stripes) and introduced a new book, The Hunter's Wings. Then we'll get back to Nathalie & Drayce's books.

Read on for my favourite excerpt from Vampire! This is just after Tony has discovered that he's been turned (not a spoiler, Eden thinks about that in the first chapter!)

Buy now: Amazon US I UK I AU I CA I Goodreads

"Guess that's no more garlic for me then," he muttered, amazed that he could still make a joke.
"We can eat garlic," she said, a perplexed look crossing her almost black eyes.
"Go out in sunlight?"
"Yep."
"Turn into a bat?"
"Sadly not," she said, an amused glint in her eyes.
"Go into a church?"
"Any day we want."
"Damn, I was hoping for a good excuse not to go," he said, thinking of his highly Catholic mother and her insistence on going to church every Sunday. Which he hated. It wasn't that he disagreed with her faith, just that the outward sign of devotion seemed more for other people than for her God. Eden just laughed. "Are any of the myths true?"
"Not really. We're difficult to kill. That's probably about it," she said with a shrug and an amused smile.
"Well that's disappointing."
"I know a vampire who sleeps in a coffin, if that helps?" She offered.
"It does," he replied, even if he was still feeling a bit disappointed about not being able to turn into a bat at will. "Guess Bram Stoker got it wrong," he muttered.
"And why do you think that was?" She asked, taking a seat on the bed, and making herself comfortable.
"You're not trying to tell me that Bram Stoker was a vampire, are you?" She laughed again, the action lighting up her face.
"No, but one of his lovers was."
"And he knew that?" He asked surprised.


“You realise we're not exactly the monsters we're made out to be, right? Well, most of us aren't," she added, a dark look crossing her face as she finished speaking. 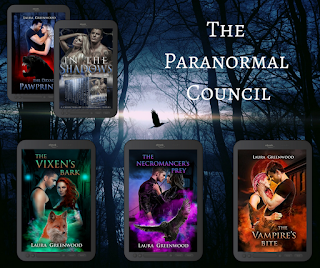 The Dryad's Pawprint:
Amazon US I UK I CA I AU I Goodreads

The Vixen's Bark:
Buy Now: Amazon US I UK I AU I CA I Goodreads

The Necromancer's Prey:
Buy Now: Amazon US I UK I AU I CA I Goodreads

The Vampire's Bite:
Buy Now: Amazon US I UK I AU I CA I Goodreads

Spellbound:
Buy Now: Amazon US I UK I AU I CA I Goodreads

His Lost Bear (Pre-Order):
Buy Now: Amazon US I UK I CA I AU I Goodreads
Posted by Laura Greenwood at 09:47