As you may have guessed by now...I'm not always the most patient of people...and as the pre-order is processing on Amazon as we speak, I have no problem sharing the amazing cover created by Ammonia Book Covers! 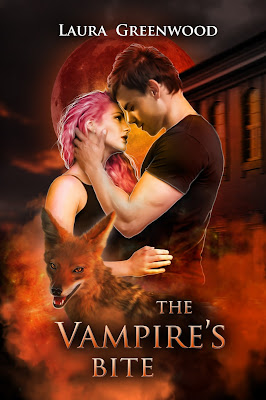 I'm super excited about this (despite the fact that book 3 isn't quite out yet!) But the main characters of The Vampire's Bite, Tony and Eden, will both have appeared in my books before! Tony, had one tiny paragraph at the beginning of The Dryad's Pawprint (bet you just thought he was there for the hell of it!) And Eden appears in the spin-off Spellbound, which releases a week today!

In fact...I love hiding characters! And because I'm feeling like sharing, here are a few characters you've met before (or will meet soon in a couple of cases!) that will get their own romance...

Which means that actually...if you've read the four books that are currently/nearly out, then you've met a good portion of my characters! And...just in case you missed them...here are when my other characters were first introduced and mentioned!

Poor Kem (panther shifter) and Lia (dryad) from The Dryad's Pawprint, don't actually make the list because theirs is the first book! But they do appear in later stories. Kem makes an appearance in The Vixen's Bark, and they both appear in The Vampire's Bite. Same goes for Eliza and Ethan, the witches from Spellbound. They first appear in their own books, but they will appear in later books, most notably in Luke's story.

Honourable mentions go to Nita (His Lost Bear) and the love interests not mentioned (those of Nathalie & Drayce), as well as the characters in the book released in November...they will be introduced in advance, but just not yet!

There may also be another spin off featuring Eliza's sister, Camille, and one of Ari's younger brothers!

It's all super exciting to me! Though maybe not for everyone else!

Posted by Laura Greenwood at 15:03