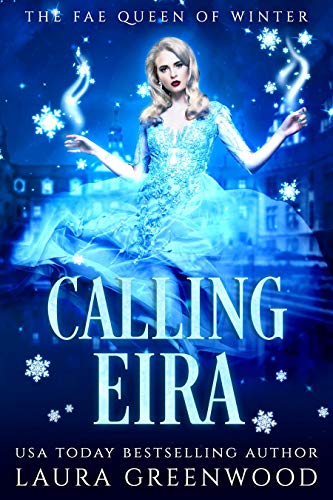 Calling Eira (The Fae Queen Of Winter #3) by Laura Greenwood

The age old battle of the Summer and Winter Fae is almost over...and Eira is the key.

With her position as the Fae Queen Of Winter secure, Eira must face the biggest challenge yet and unite the two Fae Courts for the first time in hundreds of years, while embarking on the next adventure with her family.

-
Calling Eira is the third and final book in the Fae Queen Of Winter series, a fae paranormal/fantasy with a reverse harem romance.

Buy Here - Available at most major retailers
Add to Goodreads
Wish List on Bookbub
Join The Paranormal Council for the release day giveaway.

The tingle of ice-cold magic on her fingers was oddly comforting by this point. It might only be Eira's second time calling the frosts as the Fae Queen Of Winter, but it made her feel like she deserved the crown that now graced her head. Most of the time, it was still too surreal to think of herself as Queen, but tonight wasn't one of those.

Snowflakes and the glitter of frost magic swirled around her. Eira closed her eyes and breathed in, enjoying the cold tingle. It invigorated her, and brought back all the other times she'd done this. She might only have been the Queen for the last two years, but she'd called the frosts every year since she'd turned eighteen. At first, she'd thought she was merely the descendent of Jack Frost, and that was why she had to do this. That had gone out of the window soon after finding her three mates. She was fae.

Not just fae either, but the descendent of Queen Nieves, the woman who had given away her powers to Jack Frost. In Eira, the royal Winter Fae line had finally regained the magic it was supposed to have.

A tingle at her fingertips announced her witch magic trying to get free. She pushed it down. Now wasn't the time to let that loose. She had no idea what it would do to the changing seasons, but she didn't want to find out. If she failed to call the winter, then it could cause the apocalypse. Not that her family had known that. It was something she'd learned since meeting the other Queens.

The magical sparks she'd gained when she mated with Josh withdrew into her. She could still feel them, but they rested and let her own magic fill every inch of her. Thankfully, her winter magic had cancelled out Leth's summer magic, and she hadn't gained any of his powers, unlike those of her other two mates. Using summer magic in the middle of trying to make winter happen was never going to end well. Ironically, it was just what her mother-in-law would have wanted. Not that anyone gave the former Fae Queen Of Summer any influence anymore. Eira wasn't even sure where she was being kept, other than in the Summer Kingdom.

Eira closed her eyes and gave herself over to the sensations her magic caused inside her. Nothing felt like this. Not even going to bed with all of her mates. There was something beautiful about this moment. It was peaceful, but full of power.

Whenever she called on her frost magic, she felt like she was the Fae Queen of Winter more, and it helped her feel like less of an imposter. Even if the fae themselves had accepted her after her show of power, she still didn't completely feel like this position was hers. Especially when she was around the other Queens.

A fantasy fae romance series following Eira as she takes her rightful place as the Fae Queen Of Winter. Part of The Paranormal Council Universe.