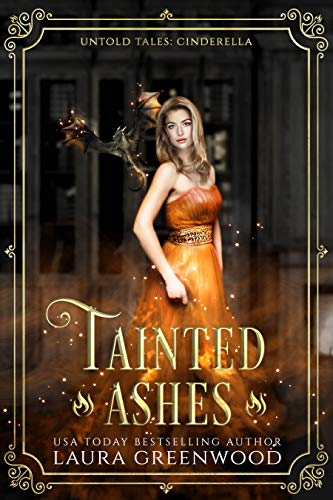 Tanwyn has always known her station in life, especially with the Duchess ruling her life.
A chance encounter with the Prince changes everything, and Tanwyn finds herself having to foil a plot, with only the help of her dragon familiar, Dart, to do it.
Can she save the Prince by midnight?
-
Tainted Ashes is a fantasy retelling of Cinderella and part of the Untold Tales series

"Excuse me?" a man asked from behind me.

I jumped, not having expected anyone to want to talk to me. Especially since I didn't recognise the voice. He was probably someone who came with the Prince. I got up and turned around, dipping into a shallow curtsy. I had no idea who the man was, but I did know it was better to be polite. I tried to ignore the tickling sensation of Dart running down my back and disappearing behind the wall. At least she doesn't want to get caught, it makes protecting her easier.

"Can I help you?" I asked, making sure to keep my voice light and airy. The last thing I want to do is insult one of the Prince's retinue.

"It's a lovely sunset," he observed. "I was looking for somewhere to enjoy it, but I see this one is occupied."

"You can join me, if you want," I suggested. "I'm not doing anything interesting, but if you want to look..." I shrugged.

"Why would you want me to do that?" he asked, his brow furrowing.

What did he mean? "Aren't you angling for an invite?"

He chuckled. "Are you offering one?"

"It makes no difference to me if you sit next to me in silence, or if you go on your way. I'm only here for the peace."

"In which case, I shall take you up on your offer." He came around and perched himself on the wall next to where I'd been sitting.

I hopped back up, keeping my skirts over my legs this time.

"Are you enjoying your time here?" I asked after a few moments of silence.

"I thought you wanted to sit in peace," he teased.

"It felt rude to do that," I muttered.

He chuckled. "I understand that. It's one of the reasons I came out here in the first place. It seems as if no matter what room I go into, girls are constantly wanting to talk to me."

"Oh, they've been told to do that," I answered flippantly. "Sort of."

I sighed, unsure if I should tell the man what was going on. It went against what the Duchess had said, particularly as he'd run back to his master and tell him what was happening. Then again, the Prince probably deserved to know what was happening so he could choose to avoid everyone if he wanted to.

"We've all been told to be as nice as possible to your master in case he wants to use us for nightly pursuits."

"My master?" the man checked.

"The Prince?" I countered. "I'm sorry, I haven't seen you before, I assumed you came with His Highness. Didn't you?"

"Oh I did," he said, an odd tone to his voice. "Nightly pursuits? Really?"

I nodded. "Between you and me, I think the Duchess wants us to spy on him, though who knows what she'd do with the information." I tried not to roll my eyes. This whole situation was ridiculous. Why was this even happening?

"I don't think the Prince will even be thinking about those."

Despite myself, I laughed, even though I knew I probably shouldn't. "I honestly didn't think he would be. I'm sure he has far more important things on his mind."

"He also respects his people, and would never treat a woman that badly," the man said.

"I like that." I stared out into the night, trying to work out where Dart disappeared to. I knew it was a good thing she wasn't still with me and gaining attention from the stranger, but I still missed her.

"Tell me, what else do you like about the Prince?" he asked.

"I see you're spying for him," I teased.

I sighed loudly. "Honestly, I don't know anything about him, other than his name. We're not given many privileges here, so we don't hear about the world outside our walls."

"But you're all dressed so finely," he observed.

"We're not usually," I admitted. "It's normally rags and muck for us here. This is the first day off we've had since...well, I'm not even sure."

"It sounds awful. Have you tried appealing to someone?"

A short bark of a laugh slipped out of me. "Who is going to listen to me? I'm a serving girl. I don't normally wear silk and lace, I normally spend my days sweeping ash out of the grate and trying not to burn my hands." I held them up to show him the welts there.

The man sucked in a breath, then reached out. His touch was light, which was the only thing that stopped me from pulling my hands away. Why was he doing this?

"This is what working does for you?"

I shook my head. "That's what working every hour of the day does to me," I corrected. "I suspect a lighter workload and some time off to heal would avoid it."

"The Duchess does this to you?"

"And she orders you to men's beds?"

"Oh, no. This is the first time she's done that, and I think it's just because it's the Prince. Not that it makes that any better. He doesn't deserve having spies forced on him."

"How do you know that if you've never heard anything good about him?"

I shrugged. "I've also never heard anything bad about him. And bad gossip always travels faster."

He laughed. "You have a point there."

A bell rang within the house, startling me into focus. I pulled my hands out of his, missing their touch almost instantly. I pushed the longing for more away. I shouldn't forget my place simply because a man showed me kindness. That was a good way to end up on the wrong side of everyone.

"Will you..." I trailed off, not wanting to voice the question on the tip of my tongue.

"Will you be at the servants’ dinner?" I asked.

A sad look crossed his eyes. "Unfortunately, I must dine with the Duchess."

"But only the Prince is dining with her." Even as I said the words, understanding dawned on me. He was the Prince. "I...I'm so sorry, Your Highness, I didn't realise..."

I dipped into the deepest curtsy I could manage. "But I've been addressing you without using your title." And complaining about my station in life. I'd messed this up more badly than I could have ever imagined possible.

"Please, I'm not offended," the Prince said. "You admitted to not knowing anything about me, I should have been fair and told you then."

I straightened my back, the urge to ask him why he hadn't revealed his identity on the tip of my tongue.

"Because you looked so peaceful out here, and I didn't want to scare you away with who I was."

He chuckled. "It was written all over your face," he responded.

"I should have recognised you, Your Highness." I hated grovelling, but for the Prince, I'd do it.

He grimaced. "Please don't call me that. Everyone else does, I have enough of it from them."

My brows knitted together in confusion, and I began to fiddle with the soft silk of my dress. "What would you like me to call you?" I asked, biting back the urge to call him an even more flowery name to get my point across.

"In public, Your Highness is fine," he admitted with a disgusted look. "But if we're alone, why don't you call me Raynor?"

"It's not proper," I responded.

"Neither is engaging a lady in conversation without revealing my identity," he pointed out. "Yet I did it all the same. And I owe you a debt. Now I know I should watch myself around all of the ladies in the house save one."

"The Duchess?" I guessed.

A smirk lifted the left side of his mouth. "You," he pointed out.

"Would you be so kind as to let me know your name?"

My eyes widened. How had I not thought to introduce myself before now? "Tanwyn," I answered.

"I don't know," I admitted. "I came here when I was barely old enough to remember everything."

"My Father's former Chief Advisor had a daughter named Tanwyn. She must be about your age now. Did you know Duke Floren?"

I shook my head. "The only member of the nobility I've ever met is the Duchess."

A series of fantasy/urban fantasy fairy tale retellings. Each book can be read on its own.