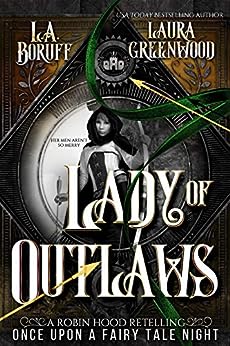 As an outlawed vampire and famed sharp-shooter, Lady Loxley Robbins is a force to be reckoned with, and won't let anything stand in her way. Or anyone.

She only two rules:

1. Only steal from those who deserve it.

2. Don't fall for any of the Merry Men, not even Val, the charming rogue who keeps insisting they should be together.

When Loxley’s sister is kidnapped by werewolves, her skills as the fastest draw in the wild west will be put to the test, and she'll have to rely on the man she's entrusted with her heart to protect her back. Even if it means accepting the claim he has over her.

Lady of Outlaws is an urban fantasy romance set in the Wild West and book one of the Tales Of Clan Robbins series. It is part of the Once Upon A Fairy Tale Night Series, a collection of multi-author fairy tale romance retellings, and includes an m/f romance. It is based on the legend of Robin Hood.

Email ThisBlogThis!Share to TwitterShare to FacebookShare to Pinterest
Labels: Lady Of Outlaws