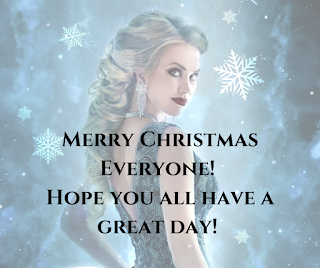 Merry Christmas/Happy Holidays To Everyone! I hope you have a great day!

Eira called the portal to take her back to the palace, glad the winter had been successfully called. Even if she'd been doing the job her entire adult life, there was something reassuring about knowing she'd fulfilled her duty as the descendant of Jack Frost, and now as the Fae Queen of Winter.
She stepped through, going from the icy cool of earth, to the warmth of her chambers in the fae realm. And to her men. All three of them would be waiting on the other side, knowing she'd want them with her when she returned.
The moment her feet stepped onto the marble floor, the heat of the fire, and the scent of hot chocolate filled the air. She closed her eyes and took it all in. She might be a winter fae, but she could still appreciate the comforts the warmth brought.
Perhaps that was in part due to the influence of Leth's summer magic, though so far, she hadn't developed any of his powers through their mate bond. And vice versa.
"Did everything go well?" Rueben asked, rising to his feet and holding out his arm to take her cape from her.
She unclasped it, and handed it to him. They had servants at the palace, but it was always nice when one of her guys took care of her.
"Yes, the frosts have come," she assured him.
"Good, then we can get on with our Christmas," he said, a mischievous smile spreading over his face, one she'd expect to find on Leth before it was on her vampire.
"Christmas isn't for another couple of weeks," she pointed out.
He shrugged. "But the Winter Court will be in full swing then, and we don't get you to ourselves. We wanted to have an evening just for the four of us."
"Then how could I say no?" She smiled, before kissing him softly.
His fangs pressed against her lips, and she felt her own want to take over too. She told them no, knowing that now wasn't the time to take any blood.
They pulled away from one another. Rueben placed a hand on the small of her back and guided her through the next door and into the sitting room.
The three of them had been busy while she'd been out, and the whole place was decked out in Christmas decorations, with a huge tree standing at the centre.
"It's beautiful," she whispered, admiring the tiny sparks of light that danced around the tree. That must have been Josh's work.
"Thank you," the witch said, pressing a kiss against her cheek and handing her a mug of hot chocolate.
Eira sighed, enjoying the heat the mug radiated. She loved the cold, but this made it better, even if she wasn't too sure how that worked.
"Don't open any presents without me," Leth called from the kitchen.
Her eyes widened. "Who let him in there?"
Josh chuckled. "He's only getting the mince pies and brandy ready for Santa Claus."
"And that's supposed to reassure me?" she squeaked. "Do you know how much damage he could do with that?"
Leth entered the room carrying a trail laden with seven minced pies and three glasses full of brandy.
"Are you expecting three visits this year?" she asked, amusement shining through her words.
Leth smirked. "Not at all, but I have to reward him for his use of an unconventional entrance."
She shook her head, laughter bubbling up within her.
Leth set down his tray and walked over, before pulling Eira into his arms and kissing her deeply.
"There," he announced. Now Christmas can start."