Hi everyone! I realised I've been a little neglectful in posting things other than new release alerts (though at least I'm remembering them!) but I'm planning on changing that now! I will be posting more excerpts from up-coming books here, as well as doing posts like this one a bit more!

But moving on from that, this post is about my completed series! I know some people don't like starting a series until they know it's finished, and that's okay! Read the way you want to! And to help, here's a little about my seven completed series (and if all goes to plan, another four will be joining the list by the end of 2019! 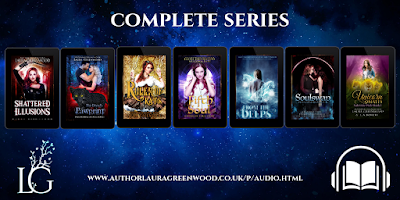 You can click on the individual covers to be taken to a retailer of your choice. Other than Valentine Pride, all of these books are available on Amazon, Kobo, Nook, Apple, Google Play, and select other retailers. Valentine Pride will be joining the others soon!

The first thing to know is that the Ashryn Barker Trilogy is also complete in audio! (If you click on the series title above, you'll be taken to a page where you can listen to samples!) This is an urban fantasy series with very light romance between Ashryn and the vampires who have taken her in. She's very snarky, and has had her world turned upside down.

You can start with Shattered Illusions (which is FREE!) and there's also the Ashryn Barker Boxed Set!

If you're an audio fan (this is a theme here!) then books 1-3 of The Paranormal Council are available in audio! This is a shifter romance series with a little bit of heat. Each book follows a different couple, which gives a hint into different problems - including arranged marriages, reluctant mates, and new vampires!

You can start with The Dryad's Pawprint (which is FREE!) or you can grab The Paranormal Boxed Set and save $5!

Renegade Dragons is also complete in audio! Join Lola and her mates as they find each other, play lots of games (video ones), flirt badly, and get a little drunk! If you're looking for saving the world, this is not the series for you - it's light-hearted, flirty, fun and nothing more!

You can start with Fifth Soul, or get the Renegade Dragons Boxed Set!

Soulswap is out in audio already, Soulshift is currently in production. Twin Souls is a paranormal romance series with a Freaky Friday Twist. Ayra and Tate were born in the wrong bodies...and with the wrong soulmates. Luckily, they seem cursed to wake up in each other's bodies and find their rightful places. Please note: Soulshift (Ayra) and Soulswap (Tate) can be read in either order, but both must be read before Soultrade (both their POVs!)

You can start with Soulswap or Soulshift. Or you can grab the Twin Souls Boxed Set!

Valentine Pride is a steamy shifter romance with mountain lions and a rare brown unicorn (and a side story about a Platypus and her wolves!) there's a little bit of suspense, but this one focuses mostly on the relationship between the characters.

You can start with Unicorn Mates. This series will only be in Kindle Unlimited for a short amount of time.

Books 1 & 2 of Seven Wardens are available in audio. This is a fantasy/paranormal series following kelpie-shifter, Macey, as she has to work out the best way to save the world. There's action, adventure, romance, and a lot of unusual mythology - it was so strange, that we even included custom drawings in the books themselves!

Rats: Tori is a series of quick short stories surrounding Tori and her husbands - otherwise known as Rats (not real rats, just people that live in the underbelly of society!) They're focused on being quick adventures and aren't romance heavy.

You can start with Ruler of Rats. Or you can get the Rats: Tori Collection.

I won't completely promise, as life does happen and things do get in the way, but these four series are ones I am (hopefully!) planning on completing in 2019:

Posted by Laura Greenwood at 18:02