Available for Pre-Order Now! The Summer of Us

I'm very excited to be able to announce my participation in The Summer of Us, a summer romance Anthology, of which, all proceeds are going to the Feeding America Summer Food Service Charity...which is as great a reason as ANY to get your copy! Pre-order Now: Amazon US I UK I CA I AU Please note: Other retailers are coming soon! My story in the set, Recruiting Love, is a spin-off of my Curtain Call series, and features Jack's twin sister, Jill! 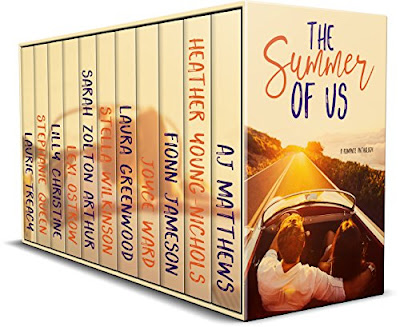 The Picture of Perfection by AJ Matthews (mild sex w/ adult language) Gus wants a date for this wedding—not any date, but Rena. She doesn’t want commitment. Is it the wheelchair, or his son with autism? Still, he’s determined to make her change her mind. Everyone photographer Rena has loved believed she was never good enough. She’s out to prove them wrong, with no time for relationships. Gus is a major distraction though, and this wedding, with all its breezy summer romance, may drag her down right into his arms. Making Him Hers by Heather Young-Nichols (steamy w/ adult language) Riley hasn’t thought about a relationship in years. Military deployment through most of his 20s left no room for that. Then his sister’s best friend comes to stay with her for the summer. Harper is everything he’s used to hooking up with. But is that all he wants? Harper moved to a city alone, with no friends, for a job that is less than a dream. When she’s allowed to spend the summer working remotely, she jumps to visit with her best friend. The fact that Zoey’s brother is a hot ex-marine is icing on the cake. Summer Lover by Fionn Jameson (clean) A college student from Tokyo goes to Okinawa for her summer break and gets a job selling shaved ice cones. There, she meets a talented surfer/drifter who changes her outlook on life and shows her a summer she will never forget. The Resort: Catch of the Day by Joyce Ward (steamy romantic suspense) A world-weary couple attempt to reconnect at an exclusive resort. The service is top-notch, the vacation all they could ask for. But appearances can be deceiving, and the pair discovers that underneath the resort’s veneer of luxury lies a dark secret that could endanger them in unimaginable ways. Recruiting Love by Laura Greenwood (sweet) Recruiter Jill has never been the spontaneous sort—until her brother meets the love of his life. After booking a spur of the moment holiday, she meets Logan, and sparks fly instantly. A Summer Thing by Stella Wilkinson (sweet) Oliver lied about meeting the girl of his dreams on holiday, but now the lie is about to be exposed as the girl he used to validate the untruth moves to his town. Now he has summer vacation to convince Chloe to keep his secret before all his friends find out! A funny and lighthearted romance. For More Than Just Summer by Sarah Zolton Arthur (a steamy male/male romance) Last Summer by Lexi Ostrow After four years, Leslie and Jacob the typical high school sweetheart romance. Only instead of staying together, they’re each headed to different sides of the country for college. Parting ways after the summer ensures no broken hearts from distance, studies or even other people. One summer is all they have left—if they can bring themselves to say goodbye when it’s over. Sonoma Saturdays by Lilly Christine (slightly-spicy romance) Cami Winston’s Spindr dates are low-budget varietals, until sexy hot Sonoma vitner Marcus Ribauld sends her life spinning out of control. Again. Beachcomber Heat by Stephanie Queen (steamy romantic mystery) There's a heat wave on Martha's Vineyard and a jewel thief sets of a crime wave. Dane partners with Shana to catch the thief and they create a heat wave of their own. If Only for Now by Laurie Treacy (sweet romance) Fading rock star Ridley needs this comeback or his career is finished. Big city journalist Joni wants to impress her mother and boss while making a name for herself. During the interview, Ridley is accidentally injured. Instead of pressing charges he offers Joni a way out, by accepting his proposition: help him recover at his upstate home in exchange for his story. Joni begins to like her surroundings, especially the sight of Ridley in tight jeans, and Ridley finds himself watching Joni. As days pass, Joni & Ridley find it harder to deny the attraction between them. As summer’s end approaches, an unfortunate situation may provide exactly what Joni & Ridley need: each other.
Posted by Laura Greenwood at 15:58

Email ThisBlogThis!Share to TwitterShare to FacebookShare to Pinterest
Labels: contemporary romance, Curtain Call, Recruiting Love, Romance, The Summer of Us