Release Day: In the Shadows 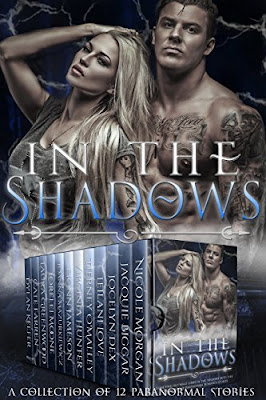 Quench your thirst and satisfy your cravings with this enticing collection of 12 paranormal stories written by the hottest USA Today, and Bestselling authors,

From wolves, and demons, to big cats, alpha males and vampire tales, you’ll be sure to find something you love because there is always something lurking…

This set includes these fantastic stories by your favorite authors:

Night Falls (Racinitine Pack 1) by Nicole Morgan
When Kinzey gets too close to Paul’s secrets, he is faced with making a choice that could not only change his world, but the only life his pack has ever known.

The Guardian (Mended Souls Book 1) by Jacquie Biggar
Can two lost souls stop a crazed madman before he strikes again?

Araya’s Addiction by Jocelyn Dex
When an Incubus wakes up naked, collared, and locked in a cell, he knows thinking with his dick has finally gotten him into trouble.

Kassandra’s Wolf (Book 3 of The Dragon Ruby Series) by Leilani Love
She drugged him. Waking up hard and alone, all Damien could think about was teaching Kassandra the errors of her ways.

Wolf’s Soul by Tierney O’Malley
All he wanted was her sword, but she gave him her heart--whole-souled.

Alix (The Coven’s Grove Chronicles Book 1) by Virginia Hunter
Building friendships isn’t easy...building a coven is even harder. Join Alix in a race for survival and her discovery that love and magic aren’t that far apart.

Asura Night by Fionn Jameson
Monsters exist. But so do demon hunters, and they’re not giving up the fight easily.


When the Clock Strikes (Paranormal Personnel Saga 0.5) by Joanna Mazurkiewicz
Thoughts about Julia had corrupted my mind to the point that I couldn’t function

Alexander’s Blood Bride (Vampires of London Book 1) by Lorelei Moone
Alexander has waited centuries to meet a woman like Cat. The catch: she's a mortal with blood is so tempting that every vampire in London will want to claim her.


The Dryad’s Pawprint (Paranormal Council #1) by Laura Greenwood
He'll give up his happiness to help his people--but can he give up his soulmate?

After Moonlight by Cate Farren
Can two souls survive a world where only werewolves remain?

The Blood Empire: Episode One A Vampire Dark Fantasy Novel
(Prequel to The Blood Rite Saga Book 1) by Dylan Keefer

Master and servant, vampire and human; their lives couldn’t be any different. Their illicit affair could cost them their lives. 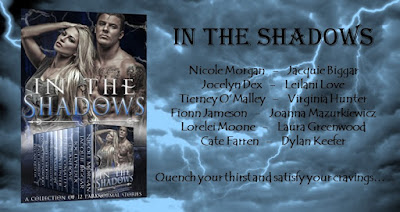 Posted by Laura Greenwood at 12:34